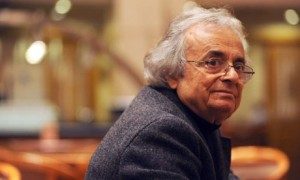 A December dusk with cool breeze wafting all along. The 16th Doha International Book Fair was all set to begin. The pivot of Cultural programmes, a key event in the fair, is the chief guest Adonis, the most remarkable Arab poet of this era. A Khayma (tent) has been specially erected on the sidelines of the fest to stage cultural events. Hardly had I entered the khyama, the programmes began. Air conditioners were toiling hard to resist the cold outside. The fragrance of oud was wafting along the tent from a censor. An august audience consisting the likes of Dr Husam al Khatheeb, professor in linguistics at the University of Qatar and a Syrian compatriot of Adonis, Qatari poets like Dr Hajar and Dr Hasan Niama and many other writers and intellectuals. Dr Naima was the ambassador of Qatar in India and was very fond of the country where he worked. I had read reports about Dr Naima’s poetic soirees in the Arab League Embassy Magazines in Delhi. Sudanese novelist Tayyib Salih narrates in his memoirs about a charismatic Naima making it a point to visit Doha when he gets a transfer order from Delhi. His aim was to have the order quashed by the Sheikh Kaleefa, the then Ameer of Qatar. He did not like to bid goodbye to India, as he was obsessively fond of the cultural milieu of Delhi.

The Khyama was woken up by the Sanskrit metaphors in Adonais’ poems. Sanskrit terms punctuated the lines he recited-Kama, Raga, Ananda, Arghya, Linga, Yoni, Adwaita. I might be the only Indian in that evening soiree. The recitation, though coincidental, seemed to have been specially chosen. It might also be coincidental that the anthology titled Awalul Jasad Akhirul Bahar (Beginning of body and the end of sea) which I bought contained the recited poem.