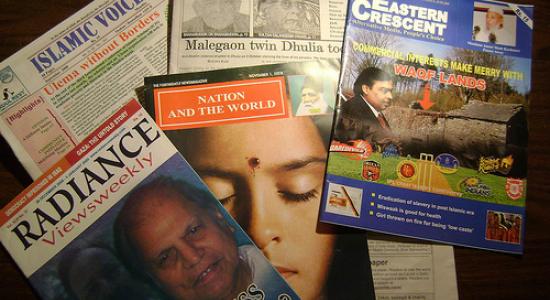 Newspapers and magazines everywhere have played a major role in informing the readers and influencing public opinion since the press began in India in the nineteenth century. Like in all other aspects of modernization, Muslims lagged behind almost every group in journalism. This article reviews English language Muslim press in India since independence and suggests concrete steps for improvement.

Leaving aside Muslim journalism in Persian and Urdu for the time being, we know of a handful of English newspapers and magazines the community members ran since the last hundred years. Maulana Muhammad Ali Jauhar’s (1876-1931) Comrade and Muhammad Ali Jinnah (1876-1948)’s Dawn, which was founded in Delhi in 1941 come to mind. Comrade was like a flash in the pan, as it published for barely 3 years, 1911-14. Dawn departed to Karachi at the dawn of independence and Pakistan’s creation.

Between August 1947 and early 1950s, there was no English press devoted to Muslim issues. From around mid 1950s to mid 1960s only two low circulation magazines covered stories of Muslim interest: one was Victor Courtois, (d. 1960) a Belgian Catholic’s paper published from 1955 to 1960 in Calcutta and Siraat of Indian Union Muslim League, published in Madras in the 1960s. The Jamaat-i Islami’s Radiance was launched in 1963. The Jamiat al-Ulama collected 600,000 rupees in the 1960s to start an English daily newspaper but failed to accomplish the goal.

For the next two decades, Radiance shined over as the only paper in English focusing on Muslim issues, albeit from a Jamaat-i Islami perspective, until Syed Shahabuddin, a retired IFS officer and politician (b. 1924) began his Muslim India in 1983, which folded up in December 2002; then The Milli Gazette resumed it in 2003 only to close it in January 2005. Given Syed Shahabuddin’s amazing energy, it is unsurprising that he revived Muslim India, a second time in 2008.

In mid 1990s, Muslim elite in Delhi led by Sayyid Abulhasan Ali Nadwi, Syed Hamid and Hakim Abdulhamid and some businessmen tried to launch a daily newspaper in English. The effort was fruitless. Instead, Syed Hamid began a tabloid One Nation Chronicle in October 1989 in Delhi but it failed to make a mark and changed as a fortnightly under a new name Nation and the World and it is still published. A Bangalore-based businessman A.W. Saadatullah Khan started a fortnightly Islamic Voice in 1987, which began an online edition in 2004. At the dawn of the twentieth century Zafarulislam Khan began The Milli Gazette in New Delhi in January 2000. The most recent additions are the Eastern Crescent, run by Markaz al-Maarif of Assam since 2006 and Eastern Post of Kolkata which began in August 2007.